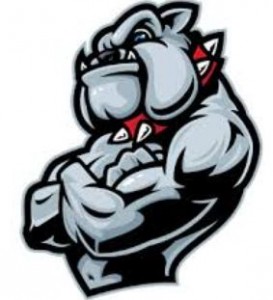 The Bulldog is a tough and tenacious animal that was bred to compete and be underestimated. A smaller breed than many other animals it faced historically, yet it was a breed of choice for success in the ring when used for bullbaiting. The Bulldog is a fighter in the ring and a most loyal companion outside the ring.

Our name is more than a title… it is a definition of what our small community has faced when paired against larger centers with more resources. The Bulldogs history is tattered with battles that shine with success and defeats. Each member of the club could share stories outlining their stake in the battles they faced, never relying on the relationship with fact or individual accolades but with the results of many. Although many have played the game, very few have lived the life to understand that scores are for fans. Football is a test of will and adversity that can only be realized by the brotherhood created on the field.

The battle between the whistles, the class of sportsmanship, prayer and handshake at the end… a game like no other.

No matter the score no one can steal the feeling of fighting for your brothers and knowing that they will fight for you.

You will get knocked down but WE Bulldogs get back up… battle tested and fighting to the end.