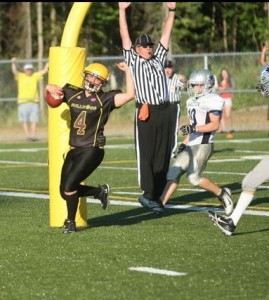 The North Bay Bulldogs Junior Varsity Team is the North Bay’s Bulldog’s summer competitive program for players aged 15 & 16. The JV program started in 2013 and has developed well since.

The 2014 Bulldogs JV squad was very competitive averaging better than 300 yards of offense in 6 of 8 games. The JV bunch showed heart and promise for the coming years. In front of our home town crowd, for the first time in Junior Bulldog history, we won our first game with a convincing 46 to 20 win.
Congratulations go out to all the members of the Junior Varsity team for representing North Bay in the provincial football competition this summer. Thanks are also extended to the terrific group of volunteers for putting on a super football entertainment event. We attracted great reviews from fans and the North Bay Nugget. The amazing tailgate style BBQ and desserts prepared by our parent volunteer group for the Bulldogs was something to be remembered by all. 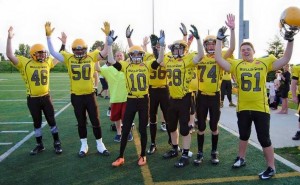 If you want to be part of the Bulldog’s Junior Varsity team we encourage you to sign up and be part of our Bulldog’s family and get in on the action. Player Registration

In 2015 the JV team improved again earning themselves a home playoff game after a 5 – 3 season. In 2016 the JV team continued to improve finishing 1st overall as season Champions and fell just short in the Championship game falling to the Orangeville Outlaws 26 -14.