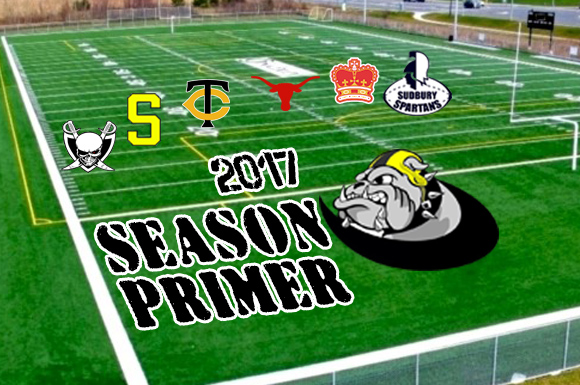 With the long-awaited return of men’s football to North Bay and North Bay’s return to the Northern Football Conference, it’s time for a primer on our scheduled opponents.

Keep in mind this is just opinion and speculation to give our Bulldog players and fans a sneak peek at our 2016 opponents. This being our first foray back into Men’s football in half a decade we will keep expectations in the realm of reality. It is always the Bulldogs mandate to make the game of football fun while being competitive – this applies to the men’s division too.

The first opponent for our renewed Bulldogs is the Sault Steelers. They are a divisional opponent who had a rough year in the 2016 NFC season going 1-7. While they did make an appearance in 2015 NFC post season the 2016 championship fell out of reach. The Steeler’s defense has struggled to keep the opponents out of their end zone. For a  team getting back into competition, this may be a good match. Under no circumstances should we, the Bulldogs, take them lightly but leverage the opportunity to find our strengths and weaknesses. It could be the Steelers endured a rebuilding year and have found some renewed life to surprise the NFC West.

The next game in the 2017 campaign will be a road trip to Toronto to battle the Phantom Raiders (or Raiders for short). The Raiders took a year off to restructure their organization in 2016. In 2015 the Raiders made it to the postseason but hit the juggernaut of the GTA Allstars and were ousted from the tournament. They have experienced coaches and staff and a large talent pool to draw from.  This will be a test for both returning Bulldogs and Raiders.

The Oakville Longhorns had a turbulent year in 2016. Their offense never seemed to gain momentum and their defense struggled with only glimpses of true stopping power. The Longhorns program has been constantly moving with an indoor program keeping their players game-ready even in the offseason. They are hungry to move up the ranks at the expense of the Bulldogs and may prove to be a tough divisional battle.

The Sudbury Spartans are a team always teetering on the upper NFC echelon.  Our neighbors have a great football culture and a strong program that has matured in the NFC trenches. This may be the team that the Bulldogs have grueling battles grinding each and every yard. The Spartans are a tough, respected team that have lost heartbreakers in 2016 to earn their 3-5 record. Sudbury had a brief appearance in the 2016 postseason but struggled against the Ottawa Invaders.

The Sarnia Imperials had the best record in the 2016 season at 7-1. The “Red Army”‘s crown logo isn’t just for looks as they were the undisputed kings of the NFC West division and the number one team in the regular season. They have a high octane offense that can march down the field and a tough bend-not-break defense. In the 2015 postseason, they lost in the semi-finals and took it a step further in the 2016 NFC postseason to reach the championship match. In the end where they fell to the GTA Allstars in a great clash of teams. Each year is different but this is the team to beat.

Tri-City Outlaws sat in the middle of the pack through the regular season finishing at 4-4. The Outlaws are a rugged team only a few years off winning an NFC championship. The Outlaws made waves in the 2016 postseason and were within 5 yards of making it into the 2016 NFC championship game in a pitched battle with the Sarnia Imperials. This is a club that is persistent and constantly makes adjustments to achieve better results.  The Outlaws are a dangerous divisional opponent that demands respect.