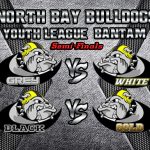 At The Bantam Grey team will look to become the immovable object to the White’s unstoppable force in the first game at 6:45pm. The White team has been on a rampage but undefeated teams can become complacent and Grey will be there to take them down if they are.

In the Black and Gold team meet in the late game at 8:30pm. These two teams have traded wins in the regular season but now this is to move on to the championship match. Gold with it rampaging defense and reworked offense battle the all-around refined skills of the Black team. 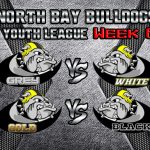 The Bulldog Youth League players are back under the lights at Omischl Sports Complex for the regular season finals. Yes, there is still one makeup game to be played in the Bantam Youth division – stay tuned for details.

Our first game kicks off at 6:00 and will see the Peewee Grey will host the Peewee White team. White has been working hard in practice and are hungry for a victory.  Grey wants to make a bid for a high seed in the post-season and earn another “w”.

The 6:45 game will see the top dog in the Bantam youth division attempt to hold onto a perfect regular season. The always tough Grey team wants to spoil their flawless record and move up in the ranks.

PeeWee Black and Gold will face off in the 7:40pm game. The Gold try to hold on to the top spot as the Black team wants to topple the leaders and push up in the ranks. 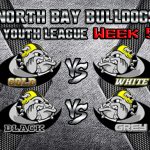 The Bulldog Youth League players are back under the lights at Omischl Sports Complex.

Our first game kicks off at 6:00 and will see the Peewee White look to kick-start  their season with a victory over the powerhouse PeeWee Gold.

Reminder team photos for gold and white will be at 5:45 just prior to the pee wee game.  Be sure to be on time so you don’t miss out!

The 6:45 game will see the Bantam Youth league leaders, the White team, try to stave off the hungry number two seed, the Gold team. This will be a clash between two juggernauts.

PeeWee Black and Grey mix it up at 7:40pm to see who is going to move up the standings. This is a crucial match for both teams.

In the main event of the evening, the Bantam Black will take on the Bantam Grey to start accent in the rankings. These are stacked teams that just need to get some traction to make a push in the final half of the season.

This is must see North Bay Football.