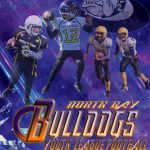 Bulldog fans we are back with a new season of Youth League football. Here is an information blast to get you started.

Coaches will hold a draft August 30th so you should get an email as to which team your player is on.

September 3 and 4th we will do a group training for all players 6-7:30

After this, your team’s head coach will provide you with a practice schedule for the remainder of the season.

Cost is $250 for the season and can be sent by email transfer to Christa or in-person via debit, credit or cash at Source for Sports. Payment is due by September 1st., register now and pay later 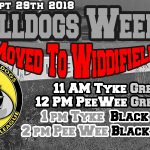 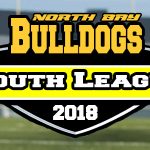 Equipment hand out is Wednesday, August 22 from 6-8 or August 26 from 4-6 at Krown Rustproofing on 514 Gormanville Road.

Tyke Camp (all tykes at once) August 27 and 28 from 6-8 at Rolly Fisher field in behind Memorial Gardens.

PeeWee Camp (all peewees at once) August 29 and 30 from 6-8 at Rolly Fisher field behind Memorial Gardens.

We will divide the kids on to the four teams and you will receive an email from your head coach as to which team your player is on and they will give you information as to when and where and times for practices for the season.

Once your young star is placed on a team you will receive a call or email from the head coach of that team advising which days, location and times your team will be practicing at.

Games are as follows:

You can go to our online store https://northbaybulldogs.com/shop/ to purchase a variety of clothing, including our bulldog’s football equipment bags. Orders can take up to two weeks to come in.  Orders are placed every Friday.

For those that did not get equipment, we will have some with us at the field, but you can still participate without it.  There may be a couple of things you can but most will be ok.

Our championship game will be Sunday as follows:

All games will be at Chippewa once again.

I have bags of pepperettes that have 5 hot and 10 mild for $30, they are individually wrapped for you to sell for $2.  Warning they are addictive!  If you want to sell a bag for us, you can take some and once sold give me the money for the bag.  We will also be selling them as snacks at the game for $2 each.

We will have our final swag draw which will take place at the banquet.  We will have two NFL jerseys up for grabs, 2 $20 gift certificates for sports cut, and Bulldogs Swag!  Tickets will be sold during the games and at the banquet. $2 each, 3 for $5 or 10 for $10.

In the Silver PeeWee Championship, at noon, the offensive juggernaut Grey will meet the powerhouse defense of Gold in a classic contest. Both of these teams have earned a win over the other in the regular season. This is going to be great football.

The Gold PeeWee Championship, at 2pm, is a classic Cinderella tale as the Black team worked hard and earned their way into the title match. Black has improved on all the fundamentals but will their grit and solid play be enough to stop the impressive White team. White has an explosive offense and a rugged defense and the best special teams in the Peewee Division. Black is riding high showing determination and an all-around improved team. This is storied finish to the season.

At 11 am at Chippewa secondary The Silver Tyke championship will be decided when the Black team collides with the White team. These two teams have had great matches in the regular season and will excite the crowd again. Black has improved on all sides of the ball will try to shut down the electric aerial attack of white.

Then in the Gold championship at 1 pm. It will see the two best offenses rampage for the endzone. It will be the defense that will determine the game with big tackles, turnovers and coverage. Don’t miss the Gold team and the Grey team as this is must-see tyke football.