Our championship game will be Sunday as follows:

All games will be at Chippewa once again.

I have bags of pepperettes that have 5 hot and 10 mild for $30, they are individually wrapped for you to sell for $2.  Warning they are addictive!  If you want to sell a bag for us, you can take some and once sold give me the money for the bag.  We will also be selling them as snacks at the game for $2 each.

We will have our final swag draw which will take place at the banquet.  We will have two NFL jerseys up for grabs, 2 $20 gift certificates for sports cut, and Bulldogs Swag!  Tickets will be sold during the games and at the banquet. $2 each, 3 for $5 or 10 for $10.

In the Silver PeeWee Championship, at noon, the offensive juggernaut Grey will meet the powerhouse defense of Gold in a classic contest. Both of these teams have earned a win over the other in the regular season. This is going to be great football.

The Gold PeeWee Championship, at 2pm, is a classic Cinderella tale as the Black team worked hard and earned their way into the title match. Black has improved on all the fundamentals but will their grit and solid play be enough to stop the impressive White team. White has an explosive offense and a rugged defense and the best special teams in the Peewee Division. Black is riding high showing determination and an all-around improved team. This is storied finish to the season.

At 11 am at Chippewa secondary The Silver Tyke championship will be decided when the Black team collides with the White team. These two teams have had great matches in the regular season and will excite the crowd again. Black has improved on all sides of the ball will try to shut down the electric aerial attack of white.

Then in the Gold championship at 1 pm. It will see the two best offenses rampage for the endzone. It will be the defense that will determine the game with big tackles, turnovers and coverage. Don’t miss the Gold team and the Grey team as this is must-see tyke football.

Just to make sure everyone knows the games are SUNDAY, Oct 22nd as follows:

Winners of both tyke teams and pee wee teams will play the following weekend in the gold championships and the runners-up in the silver champions.  So everyone plays next Sunday as well before the banquet.

All games are at Chippewa again this weekend so bring chairs and lots of water as there is nowhere to fill up.

This weekend in our swag bags we have a green bay hoodie and Pittsburgh Steelers hoodie up for grabs along with some bulldogs goodies!!  Tickets are $2 each, 3 for $5 or 10 for $10.  Be sure to bring some cash!

PeeWee Playoff Football Begins! Sunday the 22nd at Chippewa Secondary. And what a set of Semi-Final exciting matches we have in store.
At 12:00 the first of our PeeWee matches begin. The Black team has been gearing up its defense and working hard on the basics looking to find a way to beat the no-fly-zone Grey Defense. Grey will look to grind out the run game to wear down the young team and earn a big win.
And in the marquee matchup at 2pm. The highly skilled Gold team will try to drive the ball and burn the clock against the rampaging offense and defense of the White team. These teams have had some great regular season games and this should be a barn burner in the title hunt.

Youth League Playoff Time – Tyke Edition. All the work through the season pays off. The playoffs are a new season where anything can happen. The Semi-Finals will be held at Chippewa Secondary School on Sunday the 22nd. The action begins at 11:00 am.
The tidal wave of rushing offense Gold will battle the indomitable White team. The lightning ground game of the Gold against the exciting air attack of White. Will the youngest team in the Tyke division finally overcome the odds or will the powerful Gold team climb the ladder?
At 1PM the Tyke main event kicks off. Black’s steadfast defense will try to end the two-pronged running attack of Grey. Grey loves to overwhelm their opponent but will the Black-attack hold to give their offense a chance to hit the end zone and smother the fire of Grey? 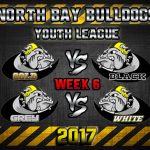 If the player shows up after the team photo, unfortunately, there will be no retakes of the photo.  They will have an individual photo and team photos taken Saturday.

We are down to about 20 banquet tickets left so if you are planning to attend and have not got yours yet, please email transfer the money to reserve your ticket or bring cash tomorrow.  Once they are gone, they are gone.

If you have not paid your player fees yet, there are a few options for payment, you can pay myself or Darlene cash or cheque at games, you can email transfer to me at this email address, or go to source for sports on fisher to pay cash, cheque, debit or credit.

The North Bay Bulldogs are rolling into Chippewa Saturday the 14th for the regular season finale and picture day! Check out times to be on the field for your photoshoot.
Our first game kicks off at 10:00 am and will see the Tyke Gold host the tyke Black team. Gold has been on a rampage but the tough Black team are out to turn the tide and bring home the victory
The 11:00 am game will see renewed Tyke White team attack the Tyke Grey team on all sides of the ball. The “Graiders” are tough and give no quarter so this game will be a blockbuster.
Our Peewee division is stacked with talent and this game will be a clash of titans. Peewee White will take to the gridiron with Peewee Grey at Noon. The playoff implication is huge.
In the main event of the day at 1:00 pm, the Peewee Black will take on the Peewee Gold. Both Black and Gold are good on both sides of the ball making this a great headliner and a high profile match to cap off our regular season. 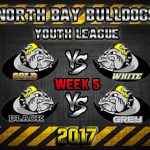 Its game day everyone at the Steve Omischl Complex!

Swag draw for tonight consists of a Pittsburgh Steelers long sleeve shirt, a Houston Texans hat and some bulldogs swag!  $2 each, 3 for $5, or 10 for $10.  Support the North Bay Bulldogs!

We have just over 20 banquet tickets left and they are first, come first serve.  $18 each.  If the player can not make the banquet please let us know so we don’t end up paying for their seat.

I am out of pepperettes at this time, however, have more coming in any day.  Stay tuned!

Good luck to everyone!