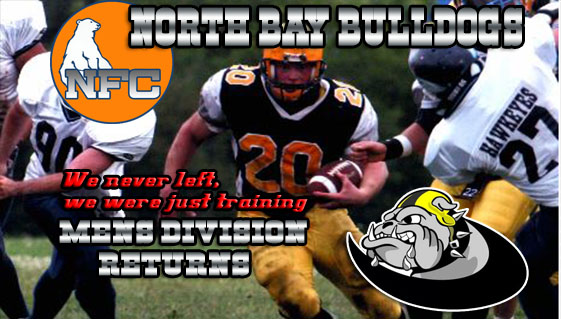 WE never left, we were just in training!

Over the past 6 years, the North Bay Bulldogs have focused on building their football club to generate additional football pedigree and hunger for the game.

Almost 1,000 players later since 2004 through our fall youth and summer programs, our numbers have spoken & we have notified the Northern Football Conference that we will field a team the summer of 2017.

Today, thanks to the many volunteers in the North Bay Bulldogs organization, after completing the Bulldogs youth, Bantam and Junior Varsity programs, a player can have as many as 7 to 10 seasons of football even before reaching grade eleven!

Details:
For the upcoming season, the Bulldogs will be suited up in their familiar colors of Black, Gold, Gray and White. With feedback from many players looking to play football this summer, we are going to a gray color jersey with gold numbers and black / white trim.

We are excited about the prospect of NFC football in North Bay… and so are the number of players asking us to move this project forward.

To date, there are a couple dozen players who have formally expressed their intention to play and at a player fee cost of under $300, its going to be very affordable….but most importantly a great football experience.

Players should register with the team as soon as practical. Jerseys will be ordered March 1st. Jersey sizes and numbers will be assigned on a 1st come 1st serve basis, so early registration will secure the preferred jersey number & size.

Players are so excited one of them produced a video: “Love of the Game”

Register here or offline with this form: Club Player Contract – 2017