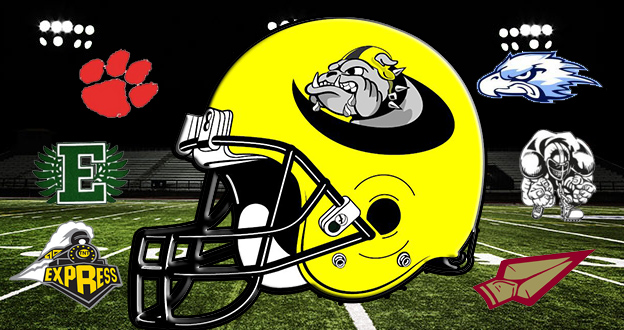 With the OMFL’s website in disarray I think it’s important for The JV Bulldogs to know their opponents. This will give fans and players context for forthcoming games and the challenges beyond midseason. Please, keep in mind this is purely opinion based off game reports from around the league.

Niagara Spears
Currently, undefeated in action and thought by many to be the top contenders in the league. This team is composed of excellent skill positions and have good fundamentals. Their program reaches deep into the OMFL and the OVFL. It is thought that the Spears don’t have the physicality of other team and prefer to finesse the ball to the end zone instead of locking up in a physical battle.

Cambridge Lions
Our JV opponents for week 6. This team is gelling under the pressure of their schedule. They have suffered two losses but have steadily improved their play each week and are poised to challenge Bulldogs. The Lions are a threat to be taken seriously and are looking to impose their will and gain a spot in the playoffs. They have a good healthy roster and they are gaining knowledge and building their fundamentals each game.  The Lions took a bite out of the Eagles in week 5 and look to lock jaws with the Bulldogs this week.

Orangeville Outlaws
This team took the ‘w’ on our Bulldogs in week 5. The team played a technically good game from a unique formation with a solid game plan. They Outlaws did out-gun our Bulldogs but the game was one that could have been our game if the fates had changed a few things. The Outlaws are a solid offensive team with good endurance but they are vulnerable to our power and physical style of play. With study and improved technical football the Bulldogs can overcome the Outlaws.

TNT Express
This is a large multifaceted organization with a player base starting from a very young age. This team brings a wealth of fundamentally sound players that have been working together for a long stretch. They are a power foe to anyone in the OMFL. Their defense is rock solid and their offense is well honed. All this being said they have been defeated and can be beaten.

Etobicoke Eagles
This was a team that in the preseason was thought to be the team to go all the way to the championship. They have a vast array of talent and a huge player base to draw from. They rely on their speed to move the ball to the end zone and make every and all opportunities to avoid a grinding physical battle. Grinding, physical battles are the Bulldog forte and if we can contain their lightening quick offence they lack the endurance to slog it out in the trenches. The Eagles fell to the Bulldogs in week 4.

Oshawa Hawkeyes
The organization is beginning to assemble and compose a JV team. Team building doesn’t happen overnight and the current Hawkeyes are working to better themselves at each play and series. This year the Hawkeye are trying to find an identity which leaves them vulnerable for our Bulldog team. They are where the Bulldogs were so never underestimate their heart.

Steelcity Steelers
This team is composed of big, power players with a strong imposing front. It has been argued that their skill positions aren’t as deep as their lines thus allowing well-rounded teams to seize the advantage. The Bulldogs haven’t clashed with the Steeler but when they do it will be a war.